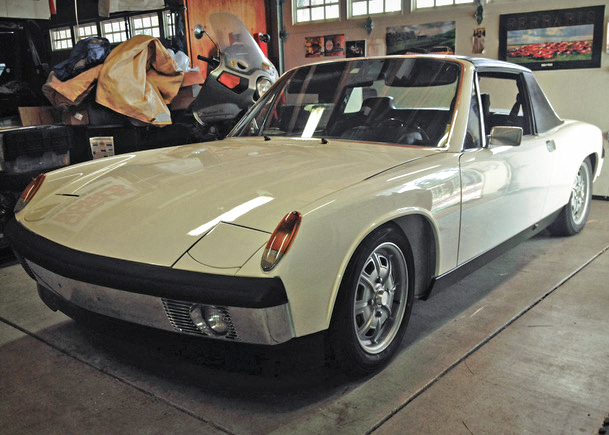 This months winner is Marty Stein! Marty is the original owner of this 1970 914-4. Originally ordered in April 1970, he had spec’d out a base model blue 914 with tan interior as he couldn’t afford the extra $200 for the Appearance Group option.

In early July of 1970 he got a call from the dealership saying 3 cars arrived on the lot and that his name was at the top of the wait list. “One of the cars is white,” the dealer told him over the phone. Previously he had been told by the dealership that they could not get a hold of any white cars.

Realizing that this vague comment may mean his dreams of owning a 914 were at stake, Marty asked if all the cars were white. The dealer replied again, “one of the cars is white.” When he got to the lot, his fears were confirmed. All 3 cars were white with the Appearance Group package.

Determined to get his car, Marty was able to borrow the difference from a colleague and picked up his 914 on July 9th, 1970. The car became his daily driver and followed him from Miami, to Vegas, and now California. It was repainted 3 times and daily driven by his son before it ended up sitting for 20 years.

In 2015, Marty started work on restoring the car with the help of some friends and a local upholsterer. What he initially thought would be a 3 month process turned into a 3.5 year project with double the starting budget. The car is once again a proud daily driver and brings its owner enough joy to forget about buying a 308 Ferrari as a stablemate for it. Thanks for the great story Marty!
Please submit your image and a brief 1-2 sentence summary to 914rubber@914rubber.com. If we select your photo for the newsletter you can win a 914Rubber gift card!