After recognizing the need for more horsepower in the European market, the factory decided to increase the performance for the launch of the upcoming 2.0 model. They built around 2000 cars originally intended for the European market. These cars were meant to be more refined than the standard 914 but they never made it to European dealers and would eventually become  somewhat of an enigma in the 914 community.

Did the factory produce them?

Yes, they did create an “S” model, but it was done unintentionally.  When they created these European Spec cars, they included the larger displacement motor and used an 8.20 compression ratio to give the car more of a sports car feel. Front and rear anti-roll bars were now stock, also included was the appearance group package which came with alloy wheels, leather steering wheel, center console with padded armrest, and a leatherette wrapped roll bar pad. 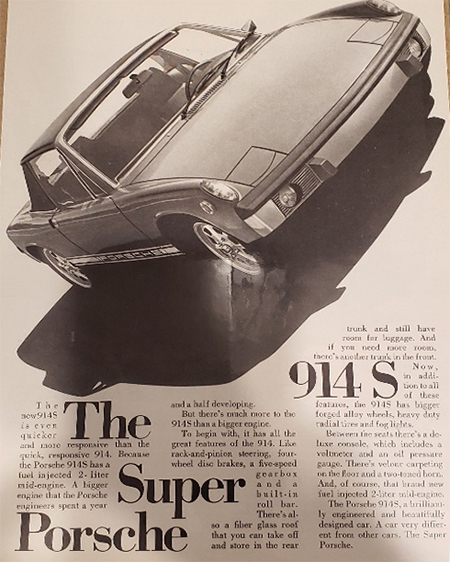 Despite originally being made for the European market, Volkswagen of America decided to purchase the entire production run of the cars. They immediately went to work on a marketing campaign to announce this new 914 model in America, and thus the “914S” was born. This was highlighted in the dealer handouts and a few automotive publications at the time where it specifically called out the “S” designation. 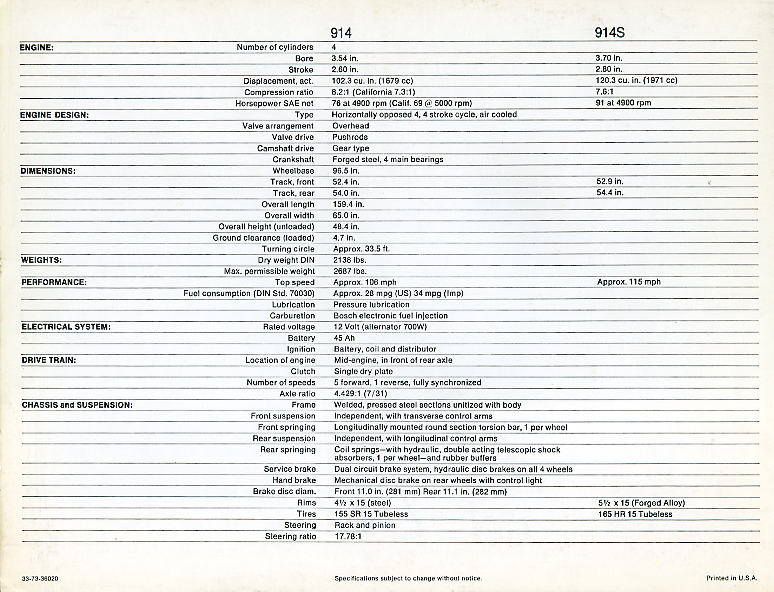 Due to the lack of some specifications on the back of the hand out (ie weights, a mpg specification), I believe the handouts were printed right away to help promote the new improved model. This is where the “S” designation first came into play.

February of 1973 - Road and Track publishes an article on the 914 2.0 where it highlights the tension between the Factory and VOA, specifically noting that they were self-designating the model as the 914/2 after the backlash from the "S" designation.

According to R&T, comparisons were being made between the 911S and the 914S in the early marketing literature and that rubbed factory the wrong way. The 911 had a bad habit of the rear end sliding around if you let off on the throttle. While this characteristic could be exploited by experienced drivers, in the hands of a novice it could end badly.

With the 914, the center of gravity was so close to the middle of the car that it was a much safer and easier to drive car that could utilize the HP in cornering. With the added stiffness of the roll bars (producing understeer) and the increase in HP there was more and more talk about the 914 compared to the 911S.

This is where the the engineers realized they had made a car that could kill the flagship model if it was given the same HP. After the initial delivery of the 2.0 European spec cars the compression was lowered and the appearance group package was split up with a few a omissions.

In late 1972 the updated brochures and literature eliminated the "S" from the official 914 line up. We will probably never know the entire story, but you can see that from 1973 forward the cars only got bogged down with more heavy emissions equipment and no further increases in HP. In all actuality this “S” designation may have put the prowess of an improved 914 on the factory radar and may have contributed to its subsequent elimination early in 1976.

So how can I identify a model “S”? It should have a late 72 production date and a serial number in the 1st 2000ish of production. They start at 473290001. The true tell tale sign is the leatherette roll bar pad. They do not crack like the factory non-wrapped ones. I actually came across this as a prospective sample for our tooling on roll bars we made, but ultimately we made the more common texture as it would suit a larger number of cars.

One of our customers is currently selling a car that fits into the category as far as we can tell. It exemplifies all the attributes of the cars first designated as an “S”. The VIN is 4732900184 and it is a well cared-for rust-free Oregon car. 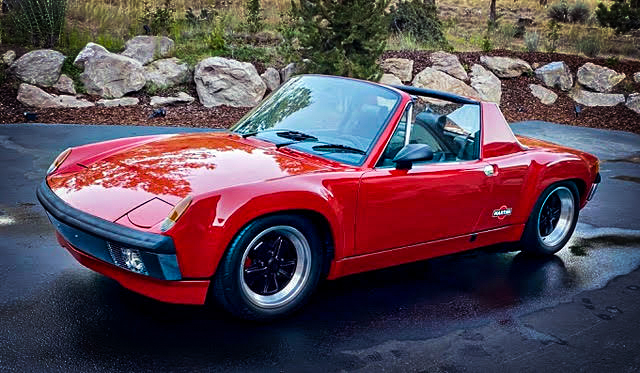